Skip to content
Velocifero surprises again with the launch of Jump, a 2-wheeled electric vehicle with an attractive design and sporty performance

Alessandro Tartarini, multi-award-winning international designer and soul of the Brand, has hit the mark again with a futuristic product that is perfectly ready for the public

Silent power: these are some of the words and details of a very first video teaser that appeared on the Web announcing the launch of Jump, the latest electric vehicle from Velocifero, a brand that has accustomed us to all fans of two wheels (and not) over time to enjoy unique and futuristic products, really ahead of trends. Just like true innovators do.

Launched in 1993, Velocifero is a concentrate of emotions and design, capable of offering unique products. Experiences more than objects, able to make each owner distinctive and inimitable.

And the magic has succeeded once again with this launch of Jump, surprising again all audiences with an electric vehicle intended for teenagers but which will certainly not displease adults: thanks to the timeless lines and a unique design, born from that genius of Made in Italy that is Alessandro Tartarini.

Tartarini, one of the top 100 industrial design in the world, is the heir to a dynasty of riders, manufacturers and industrialists in the motorcycle world: his grandfather Egisto was an official rider of Moto Guzzi during the beginning of last century, achieving important successes; his father Leopoldo was also a rider for Ducati and Benelli and he was the main protagonists of the 50’s motorcycle races. Later he founded Italjet Company, becoming a reference point on design of the motorcycle industry. Alessandro, after his studies, was employed in his father’s business until 2000, mainly focused in the development of new products. The models have been a big success in the world: Italjet Dragster, Italjet Formula and the famous Velocifero, that was the first retrò style scooter. He received the major international recognition in 1994: NEWSWEEK decreed Velocifero “the object most desired by Americans”.

Velocifero, a company that has technological innovation and an “exclusive” design in its DNA, has since 2015 concentrated its efforts on the development of ecological vehicles. With a production of almost 200,000 vehicles and a staff of 300 people, now launches a new product which is sure to be successful: Jump has been developed in Italy and will be produced in the 22,000 m2 plant located in Taizhou / China, the Silicon Valley of the Chinese two-wheeler industry.

Jump shows a sporty and aggressive look, which perfectly matches the performance offered by the vehicle. Sporty performances that will leave even the most demanding riders satisfied.

All without compromising comfort, driving quality and above all autonomy of charge: provided by modern technology 72 volts 40 ah, it reaches a range of over 100km. Perfect, therefore, for all uses.

Alessandro Tartarini has once again created a product with a distinctive design, underlining the uniqueness of his creatures: “Traditionally Design was considered an exception reserved for luxury segments. Now the Design is becoming the synthetic expression of the Company attention to both the customer relation and to product innovation, by adding comunicative value. Velocifero Jump expresses a synthesis of modern technology and timeless spirit. Cuore e Passione. Heart and Passion. These are the products we want to make”.

The product will soon be distributed in all countries of the world where the Velocifero brand is present. To book a model or receive more information, you can connect to www.velocifero.eu. 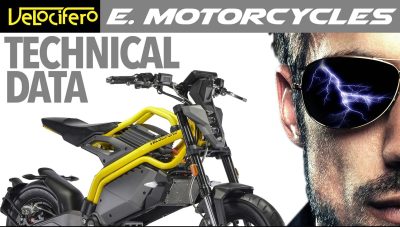